This story is from Kathryn, who wanted to share her story about her experience of having placenta previa and placenta accreta the complications that followed.

Henry was my 3rd pregnancy following 2 caesarean sections with my 2 other children. Around about 12 weeks into the pregnancy I had some very light spotting which raised my concerns slightly. While not unusual, I had not experienced this in my last 2 pregnancies. This was to be nothing compared to what I experienced at 22 weeks.

I was asleep in bed when I was suddenly woke with what felt like my waters breaking. I rushed to the bathroom and discovered that I was bleeding heavily. I can only describe it as a tap being turned on the blood was coming out so fast. Scared that my baby would follow I shouted my husband to ring an ambulance. By the time they had arrived I collapsed into the arms of my husband due to the amount of blood I was losing.

The paramedics rushed me to hospital where I was stabilised and put on a monitor. Alone and frightened I had come to terms that my baby had passed away and I was going through the motions of having this confirmed. My husband arrived about an hour later, they put a monitor on my stomach to try and find a heartbeat and to our complete surprise we heard his little heart, very strongly beating away. We were both over the moon but still very scared at this point. I was then taken for a scan which confirmed I had complete placenta previa and boarder line placenta accreta. I had never heard of this and was quickly told that there was nothing they could do and I would have to be put onto delivery suite and prepped for the baby to be born. I was monitored first and the bleeding seemed to have stopped and the baby’s heartbeat was stable.

As I was only 22 weeks the hospital I was in did not have the facility to care for such a premature baby so in the early hours of the morning I was transferred to the Liverpool Women’s Hospital which specialise in premature births. As the paramedic came to collect me the ward sister explained to him that I was to be kept still as possible, he should not go over any speed bumps and he should not break too harshly otherwise it could set off my labour. It was at this point that I realised the seriousness of my condition. Once I was transferred to the Liverpool Women’s hospital they assessed me and said that my case was quite serious as I had started to bleed so early on. They said I would have to be on complete bedrest until the baby was born. I was completely devastated that I would be spending the next 15 weeks in a hospital that was a 40 minute drive from home. But this is what I did!

I had many more massive bleeds and each time I would be placed on the delivery suite to be prepped for delivery. I was never allowed to be on my own at all and the doctors said that should they not be able to stop the bleed they would have approximately 6-8 minutes to save my life and my baby’s life as I would bleed to death. I spent the whole of Christmas and New Year in hospital. I had many transfusions for iron and blood, 38 cannulas fitted in total and also had to be monitored closely for blood clots. A few weeks prior to delivery I was scanned again and the specialist confirmed placenta accrete was there and I would have to have a hysterectomy during delivery as it was too dangerous to let the bleeding stop on its own.

To my surprise and the surprised of the doctors I managed to get to 37 weeks, it was a rocky and very scary road along the way but we had got so far. I had had steroid injections for the baby’s lungs and we were sent to theatre for a caesarean section as the specialists felt like the baby was strong enough at this point. There were many different surgeons on stand by on the morning of my delivery. Surgeons to deliver the baby, surgeons to perform a hysterectomy and also specialist nurses to assist the baby should he need it. After a few hours in surgery the surgeon managed to ‘hack’ away at my placenta. Fortunately he was able to deliver the baby safely and also avoid giving me a hysterectomy by leaving part of the placenta in and allowing it to disperse on its own accord.

Henry was born 6lb 14oz, beautiful and healthy. From 22 weeks onwards I was not allowed to enjoy any part of the pregnancy with him however he was worth all the worry and stress to be here today. 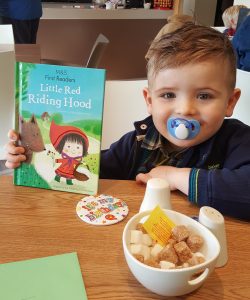 He was worth all the worry and stress