This is the story of a wonderful, brave mum called Lauren, who wanted to share her story about her experience of birth trauma, having a baby in NICU and the long term impact on their family.

I want to say before you read my daughter’s birth story that I was nineteen years old when I gave birth for the first time. I read your typical books on labor and delivery but as most of you know you don’t really understand it all until you experience it.

All I wanted out of life as a little girl was to be a mom. So, you can imagine my excitement when my husband and I discovered we were expecting our first baby.

I knew this baby so well already. I spent the entire 9 months learning all I could about this beautiful little life growing inside of me. I felt her squirm, kick, punch, and flutter. She had a strong personality as well as a very strong heartbeat. I knew my life was about to be forever changed, I just didn’t know how true that was.

After an amazing pregnancy with no complications I went into labor at 40 weeks 3 days. Contractions started at home and like most new mothers thoughts filled my head, “Is this braxton hicks?” “Is it really time?” “When do I go to the hospital?” “Was that a contraction?”. I went for my check up and my blood pressure was a little elevated so my OB wanted me to go to the hospital and get checked out. So, off I went only to get sent home with the usual instructions. I spent the next day timing contractions but they never got regular, I couldn’t sleep, neither could my husband because I was pacing the floors and complaining constantly.

We went back to the hospital the following evening and they then decided to keep me in. I was only dilated to 4 cm and things were moving extremely slow. The staff suggested for me to walk around the hospital and come back in a certain amount of time and get checked again. Things are a bit foggy from this point on but I believe they started me on pitocin when I went back into the room. I remember accepting their offer for an epidural and when the anesthetist came in it took an hour and fifteen minutes to administer, for reasons unknown to me.

When the time came for them to break my waters the doctor mentioned there was meconium and informed me that the NICU team would come in when she was being delivered just as a precaution. I had no clue what that meant, my mom’s face looked a little concerned but I didn’t really worry at this point. The nurse told me to begin pushing when I was at a 10 cm. This lasted for 3.5 hours. If someone said to me “one more push” again I think I may have screamed. (With an epidural) the nurse decided to have me move into different positions to see if that would help the baby come. She had me stand up, and push, get on all fours, and push, squat, and push. The baby’s stats started to drop and the nurse buzzed for the doctor. I remember feeling relieved that the doctor was going to come do something, anything! Well, I was wrong, she peaked her head in the door and looked at the nurse, then me, and said, “You still have a lot of pushing to do, wake me up in a couple of hours.”

Shortly after that I looked at my husband and told him I was going to be sick, he ran over and got me a pan and then with every contraction, I started vomiting. I was so embarrassed; I continuously kept apologizing to the nurse. I guess, it was about an hour later the doctor came in with a vacuum in hand and again looked at me and said “well, I’ll help you, but you still have to push” I remember thinking, that was rude. She placed the vacuum on the baby’s head and put her foot on my bed. She pulled on her with everything she had. My bed was nearly upside down so I couldn’t see anything but my husband.

“Kaylee has forever changed our lives and showed us how precious life itself really is.”

The look in his eyes was one I wish to never see again. He was white as a ghost but trying his hardest to be strong. I knew something wasn’t right but my naivety kept me from panicking. Finally, after what seemed like forever, he gave me the thumbs up. I didn’t know then but what he had witnessed was the umbilical cord was wrapped around her neck 2 times then around her shoulder and she was completely grey. Her Apgar scores were 0 and 1. He watched them do CPR and finally she took a breath. I knew that not hearing her cry was not a good thing, but everything was happening so fast. They asked my husband if he would like to walk her to the NICU and he stopped by the bed and showed her to me for a few seconds. She looked so strange, not at all what I had expected…then she was whisked away.

Once they rolled me into the mother/baby room the nurse told me they were running a few tests on her and she would be back in my room in the morning around 7am. That was 4 hours away so I rested for a while then got up and took a shower around 6:30am. 7am came and she wasn’t there so after a few minutes I had my mom go ask when she would be coming. They told my mom that they were having a meeting and it would be soon. I remember how anxious I was to hold her, I didn’t even know the importance of skin to skin like I do now but naturally, I knew that a baby needed its mother.

A little while later there was a knock at the door and I was so excited to get to see my precious daughter but instead it was the NICU doctor. He informed me that there was nothing else they could do and she would need to be transported to a bigger, more equipped hospital. His staff was working on finding an available bed. He said that in the meantime I could go to the NICU and see her and warned me that she had been intubated because she was having cluster seizures and stopped breathing a few more times. I felt like I was in a fog, just going through the motions. I got to see her in the NICU before she left and wanted so badly to be able to hold her but knew that was out of the question.

The ambulance arrived to transport her to the other hospital. My husband left and rushed to the other hospital and actually beat the ambulance there! I remember the nurse being so compassionate about my feelings and gave me the blanket she had been using. I remember standing at the hospital window and watching them load her up and desperately wanting to rush out there and go with her. I snuggled her blanket and smelled her sweet smell and wondered if she would even know who I was. I was feeling things I had never felt before, I was hurting, and my heart was aching for my baby. They said I needed to rest and I could be discharged in the morning. They gave me a sedative and put me to bed. I woke up early and signed the papers and I went to see my baby.

When I arrived the staff informed me that she continued seizing on the commute to the hospital and they ended up having to put her essentially into a medically induced coma. We checked into a nearby hotel and things were pretty touch and go for a while and when she was around 6 days old, she cried! It was shortly after then that I was able to hold her and put her to my breast. I had spent the past week pumping and they were feeding her through a nose tube. I just knew all of our chances of successfully breastfeeding were out of the question but boy was I wrong!

We got to take her home when she was 3 weeks old.

Today, our girl, Kaylee is 5 years old. She still has lasting effects from the oxygen deprivation, strokes, and brain damage she endured, but she truly doesn’t let much stop her. She wouldn’t have survived had she not been a born fighter. Our weeks are filled with therapy, autism, picture schedules, cerebral palsy, apraxia, doctors, etc. She has been seizure free for 2 years now and we are thrilled! I would not be the person I am today had I not had such a traumatic experience. Kaylee has forever changed our lives and showed us how precious life itself really is. 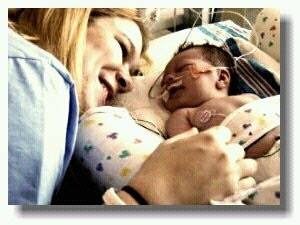 All I wanted out of life was to be a Mom.